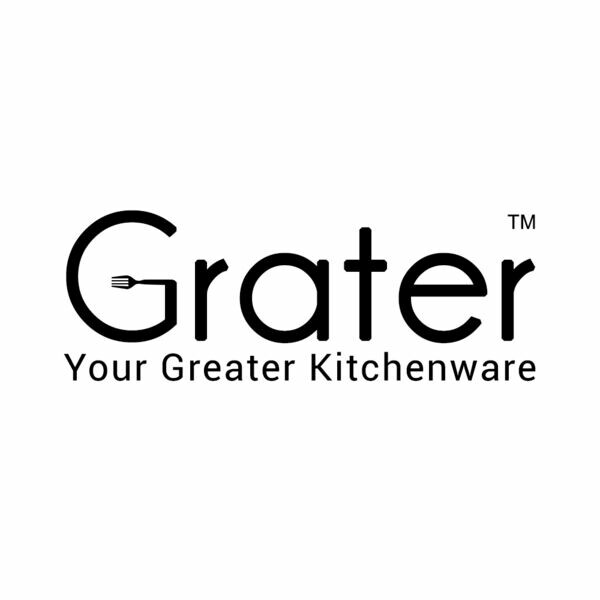 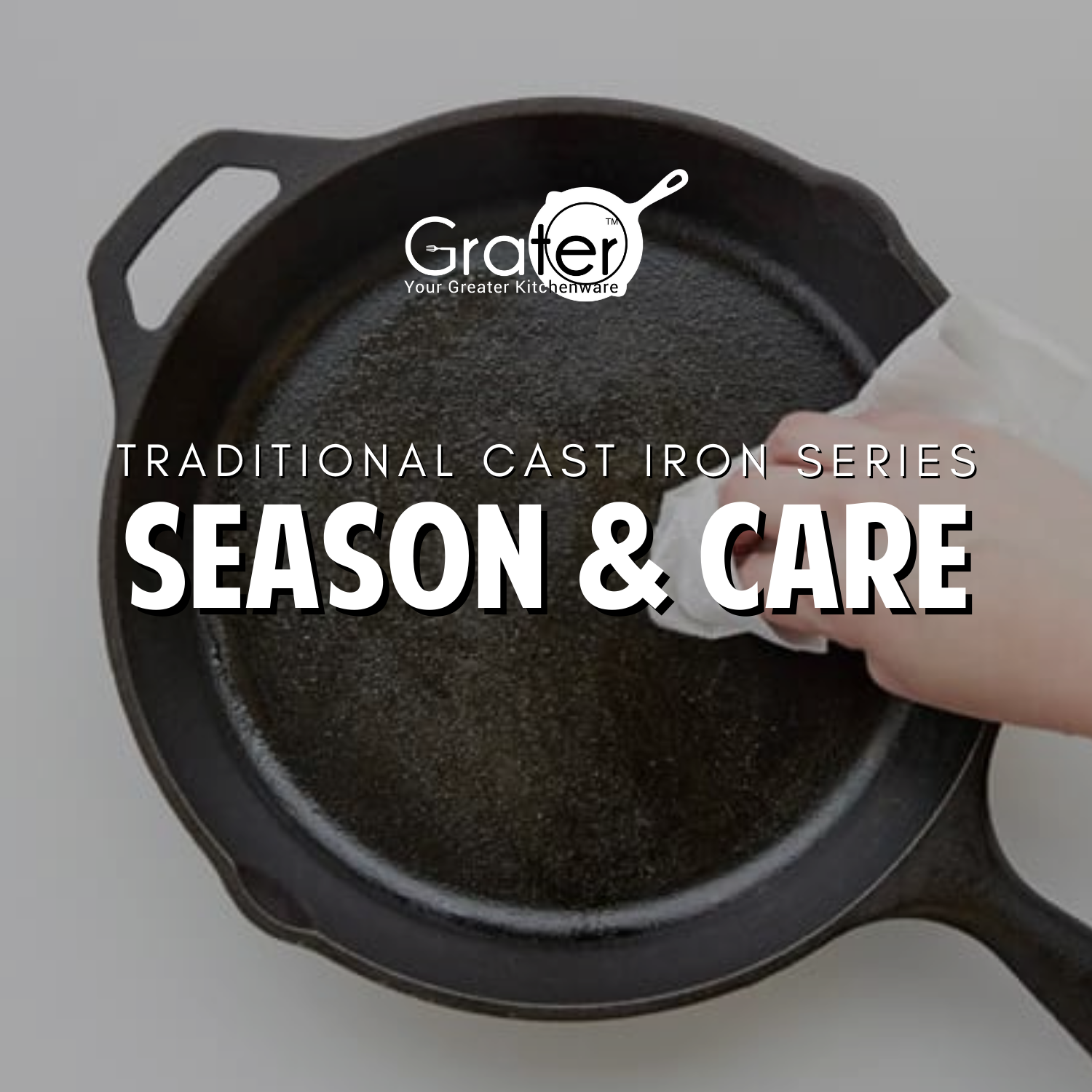 I The Importance of Seasoning

Seasoning allows the oil bonds on to the surface of the skillet, creating a rust-free and non-stick barrier between the metal (cookware) and the food. Unlike other cookware, cast iron skillet gets better and better with use. A new cast-iron skillet is raw natural metal and just like our skin, it has pores. When you heat it, the pores open and absorb the oils and fats from what you're cooking. Seasoning will eventually develops a rust-resistant and non-stick smooth surface for cooking.

Every piece of Grater's cast iron skillet was pre-seasoned with vegetable oil in the factory to prevent rusting before reaching your door. Customers still have to clean and re-season it before starting to use it.

Cast iron cookware requires more effort and time to maintain it but in return, it will reward you and your family with generations of loyal service!

After cleaning the cast iron skillet, wipe it with a paper towel until it's completely dry, or set it over a low flame until all the water has evaporated. If you leave it wet at all, it may end up rusting.

You may refer to [Cast Iron Cleaning] for more details.

Apply a very thin and even layer of cooking oil to the cast iron skillet inside out, including the handle and the back of the skillet. Use Grater's disposable rag to wipe the excess oil. Using too much oil may cause your cookware to become sticky.

Step 3A: Bake in oven

Place the cast iron skillet in the oven upside down and cover the bottom rack with a large baking sheet or aluminum foil to catch dripping oil. Bake at 180°C to 260°C for an hour and rest to cool. With high temperature, the oil will smoke and will bond into the metal to form a layer of classic black patina on the skillet. Refer the FAQs session below for different types of oil's smoking point.
*Note: You may need to turn on kitchen hood to extract the smokes out of your house.

Step 3B: Bake on Gas Stove

If you do not own an oven, the alternative way is to bake it on top of a gas stove. Preheat your skillet on a gas stove until it smokes. Yes, you have to heat it to the oil's smoking point! Apply a very thin and even layer of cooking oil on the skillet with a pair of tongs and rub it with Grater's disposable rag. Continue heat until the it smokes and the surface is dry and no longer sticky (the oil will be fully absorbed on the surface of the skillet)

Credit to "How to cook with cast iron" by Tasty. Watch the first 3 minutes to understand more about seasoning a cast iron pan.

I FAQs on Seasoning

What does "Pre-Seasoned Cast Iron" mean?

Pre-seasoned means a coating of vegetable oil has been applied to prevent rusting after manufactured in the factory or known as “factory seasoned”. Customers still have to clean and re-season it before starting to use it.

Seasoning is a process of treating the surface of cookware with heated oil or fat to produce a rust-resistant and natural non-stick finishing. It may take a little extra care and time to form the black and shiny patina (as known as oil seasoning layer) onto the cast iron cookware.

Can I just season the part i cook with?

Cast iron cookware was made into 1-piece which you can't just season a part of it but you have to season the entire thing, including the handle, the side and the back of the skillet.

Seasoning cookware with vegetable oil will permanently bond the fat / oil to the surface of the pan. Protect and maintain the seasoning step will build the "non-stick" layer over time and your skillet will lasts forever. The more you use, the better it will work.

Why my cast iron cookware will rust?

Cast iron cookware is prone to rust naturally without proper seasoning process after cleaning. Scrub cast iron with steel wool in soapy water and start the regular cleaning process. Experts agree that a little bit of rust isn't likely to harm you.

What oil can i use for seasoning?

You are allowed to use any types of cooking oils and fats to season cast iron. It depends on your preference and budget. Every cooking oil will have different levels of effectiveness and smoke point. Refer to Grater's oil chart to check your oil's smoke point.

#Disclaimer: the values in this table represent the typical smoke point for common commercially available edible oils and for reference use only. Smoking points may vary due to several factors such as processing technique and seasonable variations.

Can I use lard or any animal-based fats for seasoning?

Yes, you can use any type of fat/oil to season your cast iron skillet. Traditionally, people use lard to season their cast iron. However, if you seldom use your cast iron cookware, we do not recommend it as the lard and any other animal-based fats can go rancid if the cookware is stored for too long.

Why there is black residue/flakes on my kitchen towel even though i have cleaned it? Is this normal?

If your cast iron skillet is brand new, the black residue is likely the factory's preseasoning. However, if the situation persists even though you have stripped off the preseasoning layer and reseason it. it may due to the carbonized oil, charred food, or flakes of polymerized (seasoning) oil.

The carbonized oil happens when you are using an oil that its smoke point is very low, such as olive oil. If the smoke point is too low then you’ll carbonize the oil and it will turn into a black residue that will rub off on your food.

When your seasoning works a little too hard with acidic foods or really high heat, the dark residue can come off on your towel when cleaning. All the above-mentioned phenomenon is normal and harmless.

Sometimes, the polymerized oil may flake off your cast iron skillet if layers of seasoning have not fully bonded to the metal (cast iron skillet). Simply scrub the skillet with a nylon brush or salt, then rinse, hand-dry, and rub with oil. You may want to try seasoning in the oven to help build up a strong layer of seasoning.

Why the new skillet’s surface is rough or uneven?

Our cast iron is produced by pouring molten iron into a sand-made mold as sand has a higher melting point than iron. This mold creates a rough, sandpaper-like surface texture. Due to this unique property and the production processes involved compared to other materials, cast iron cookware is vulnerable to more potential defects. We often named this as "Natural Cast Iron Defects" which has nothing related to damage or product defects under warranty disclaimer. The natural defect does not make the cast iron skillet is anything lesser than a normal cast iron skillet. They are equally good.

How to further enhance the seasoning process?

Cooking with high grease food such as bacon would help in the seasoning process.

Save this product for later

Honestly Low Price! We believe that cast iron cookwares doesn't need to be expensive here! We aim to cut down all unnecessary middleman and marketing costs, including retail shop rental. Yes! We are fully operating on e-commerce basis only.

We invest our time and effort heavily in sourcing the quality materials and manufacturers for our products to ensure that our customers can enjoy using it for years and years.

We are offering free shipping within West Malaysia for orders above RM100 to ease customers' burden. Valid until further notice.

No product is guaranteed good but we do offer 1-year warranty on manufacturing defects. Activate your warranty by joining our Facebook group now! The group can be found on our Facebook page.

Cast iron cookware is one of the safest cookware options out there because it doesn't contain any coating or harmful chemicals that could leach into food. Please refer our blogs on "How to cook with Cast Iron" to understand what not cook in a cast iron cookware,

By reducing all the fancy & luxury packaging to further cut down the cost and invest every cent into improving product quality. What's more? it helps to reduce waste & keep our environment green! 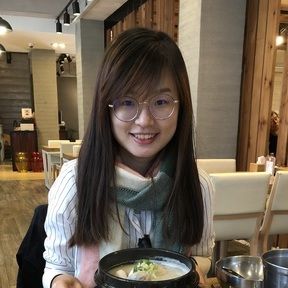 We at Grater are on a mission to become the leading experts in providing premium yet affordable kitchen and dining products.

Our team always trying out different cookwares to test for the functionality and durability. It’s just as important to choose cookware which is free from toxic materials such as polytetrafluoroethylene (PTFE) coating. Grater is on the mission to make sure our customers are not bringing toxic chemicals into their home or serving their families for dinner.

For more information about products and policies, please refer the pages at footer menu or check this out: gratershop.com/pages/about